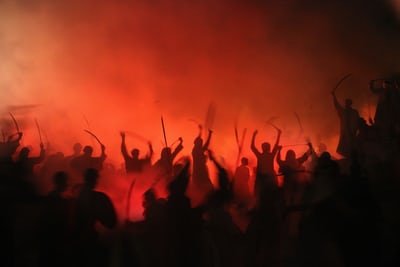 There is an ongoing battle between two kingdoms – the kingdom of God and the kingdom of Satan. This battle has been on from the time Satan rebelled against God and lost his position in heaven (Ezekiel 28:12-19). You can’t afford to be ignorant about this battle. You need to be fully aware you are engaged in a battle with Satan and his cohorts. Satan and his kingdom are in direct opposition to everything God wants to do in your life, everything God wants you to be. This is why they won’t for one second relent, but will make sure they fight you every step of the way.

God has mapped out a good plan for your life, but the devil doesn’t want to see that plan come to fruition. If you never knew it, know it now. Satan hates you with passion. He hates seeing you joyful or at peace. He hates to see you progress. More importantly, he hates to see you love, serve and obey God. This is why when he fights, he fights dirty, he fights with a troop.

Ephesians 6:12 says, “For our struggle is not against flesh and blood, but against the rulers, against the authorities, against the powers of this dark world and against the spiritual forces of evil in the heavenly realms”. The real enemy you are up against and who daily fights and opposes you is not someone with flesh and blood. It’s not your mother-in-law, your difficult boss, or your ruthless landlord. Your real enemies can’t be seen with physical eyes though they may use people against you. Your real enemies are the organized kingdom of darkness headed by no other but the devil, our great adversary.

The battle they launch against you comes in different shapes and forms. They use nice looking things and people to derail you. They seek ways to threaten your peace and security. They plant all kinds of problems and difficulties into your life. And they try to distract you from keeping your focus on God and pleasing Him.

God is fully aware of the kind of battle we are up against. He has made available for us everything we need to fight the battles of life and come out victorious. 2 Corinthians 10:3-4 tells us “for though we live in the world, we do not wage war as the world does. The weapons we fight with are not the weapons of the world. On the contrary, they have the divine power to demolish strongholds”. God has given us well-made weapons of the best materials to face any battle. We don’t use our bare hands to fight for we are not fighting flesh and blood. Neither do we use arrows, guns, bombs, missiles or any of the latest weapons of mass destruction. No, we have something much stronger. We have the strong weapon of prayer to attack, combat and overcome any enemy.

In order to stand and prevail, you must be a person of prayer. Jesus told His disciples to watch and pray if they don’t want to fall into temptation (Matthew 26:41). Falling into temptation is falling into the devil’s trap; it is losing ground to the enemy.

To live like the winners God has destined us to be, we need to follow wholeheartedly Paul’s prayer advice in Ephesians 6:18. After informing us of the kind of battle we are engaged in, Paul then said four very instructive things about prayer which can defeat the enemy. The first thing is to ensure that we pray on all occasions. Next, we should pray with all kinds of prayers and requests. Then we should be alert in the spirit. Finally, we must keep on praying.

ON ALL OCCASIONS – Prayer is not just for when you are confronted with a problem. In the good times and bad times, you have to pray. When there is a need in your life and when the need has been met, you have to pray. Prayer has no vacation period, no short intervals, no recess period. Every day is a day of prayer because every day has a battle of some sort you have to deal with. No wonder Jesus said “each day has enough trouble of its own” (Matthew 6:34). 1 Thessalonians 5:17 tells us to pray without ceasing. The moment you give up on praying, you put your life at risk. Prayer builds a wall of protection around you. An inactive prayer life weakens and crumbles that wall.

ALL KINDS OF PRAYERS AND REQUESTS – There are all kinds of prayer. There’s individual prayer, there’s corporate prayer. There is prayer combined with fasting, prayer of agreement, binding and losing prayer, spiritual warfare prayer, thanksgiving prayer, prayer of repentance and consecration. Your prayers can be a supplication, petition, or intercession. Prayer is not stereotyped. It can be done in so many ways. One way alone of praying or just one type of prayer cannot guarantee you total victory. This was why when Jesus’ disciples were faced with a situation where they were unable to cast out a demon from a boy, Jesus made them understand that though they had prayed which was a good thing, for that particular situation, they needed to combine their prayers with fasting (Mark 9:17-29). They probably thought because they had prayed this same way before and gotten results, they would get a similar result this time around, not realizing that every situation is unique and requires a different prayer approach or strategy.

So when you pray, invite the Holy Spirit to lead you and take over your prayers. The Holy Spirit knows which situation requires just praise, which requires you to bind some forces of darkness from operating, and which calls for your going down on your knees to repent and seek God’s mercy.

BE ALERT – In this ongoing battle with the kingdom of darkness, we must be spiritually awake and alert. How do you think David got to know there are evil arrows that fly by day and terror that goes with the night time (Psalm 91:5)? It was through spiritual insight. God opened his eyes and he saw what the enemy was up to at different times of the day. You and I need this kind of spiritual alertness to overcome the enemy.  Prayer is one aspect of life you don’t let sleeping dogs lie. You need to be fully awake, alert and spiritually alive for your enemy is prowling around looking for someone to devour (1 Peter 5:8). If you are asleep while he is busy prowling, you might end up being his next victim for some awful tragedy or disaster. That will not be your portion in Jesus mighty name. AMEN!

At times the battles of life may appear overwhelming, but don’t lose heart. “With God we will gain the victory and he will trample down our enemies” (Psalm 60:12). Your enemy may look so strong and tough, but God is much more powerful. Satan is no match for your God. All you need to do is keep connecting with your God in the place of prayer and He will take over the battles of your life and surround you with songs of deliverance.