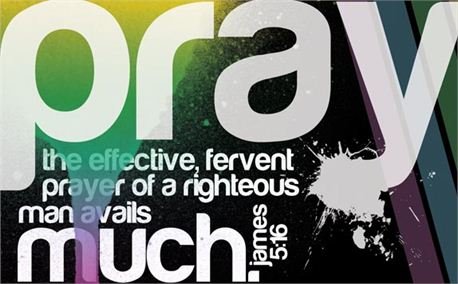 James 5:16 is a call to prayer; it is God calling on believers to arise and pray for our prayers can avail much. Satan knows how far our prayers can go that’s why he doesn’t want us to pray and does everything possible to keep us from the place of prayer.

There are four main things that suppress, subdue, quench or limit the Spirit of Prayer on the inside of us:

In this scripture, Nehemiah was told that the walls of Jerusalem had been broken down and his people were in trouble and in disgrace. Nehemiah was moved when he heard what had happened to his people and to Jerusalem. The news touched Nehemiah’s heart. Something began to happen on the inside of him with respect to that situation. Nehemiah sensed a need to pray about that situation. There was a strong urge, a strong burden placed on him to pray about that situation. And so immediately he heard this news, he went into serious prayers and fasting. And his prayers availed much for his people and the nation. The same people who had faced shame and ridicule were restored and the walls of Jerusalem were rebuilt. All this happened because one man had a burden to pray and he responded to that burden at the right time.

A prayer burden is a divine motivation on the inside of you to pray about a particular need, person, issue, or situation. It is simply God trying to get your attention to pray about something or for someone. It is God giving you signals to pray.

Without a prayer burden in your heart, you will remain indifferent to certain things happening in your life or in the lives of others, or in your church or nation. Like it happened in Nehemiah’s time, the walls of your marriage, finances, career, church and nation can be destroyed, people around you may be facing all kinds of trouble and disgrace, but you aren’t really touched by what is happening. Nehemiah didn’t treat the situation of Jerusalem lightly because he had a prayer burden.

When a person doesn’t have a prayer burden, like the Israelites, you can be on the same mountain, on the same level in your life for months, for years and it doesn’t affect you (Deuteronomy 1:6). You aren’t bothered. You don’t see the need to pray your way out of that situation. Or even if you pray, it’s one half-hearted prayer that doesn’t have much impact.

Someone may then say that if a prayer burden is from God, I can’t be faulted for times I didn’t pray about certain things since I didn’t have a burden to pray about those things. The truth of the matter is that there are so many prayer burdens God has put on the inside of us at different times and in different ways. The mere fact that you have the Holy Spirit in you is enough proof that prayer burdens have come upon you at different times and in different ways. But we suppress the burden to pray because many times we aren’t spiritually sensitive.

Nehemiah wasn’t the only one that heard that the walls of Jerusalem had been broken down. But it was only Nehemiah that went into serious prayer about that situation. Others may have just gone around telling one person or the other ‘have you heard? The walls of Jerusalem have fallen down’ and that was all they did with the information. While for some others, all they did was sit down and analyze why the walls fell down. But Nehemiah was spiritually sensitive and alert that’s why he knew that this information had come to him for a reason. There was something God wanted him to do about what he had heard. He knew that this was a call to prayer.

Sometimes you are even sensitive in your spirit and you know God wants you to pray about something, but sleep, tiredness and spiritual laziness keep you from doing anything about the prayer burden you have received. This was what happened at the Garden of Gethsemane in Matthew 26:36-46. The disciples didn’t leave their beds the night Jesus was betrayed to just go and sleep in the garden. They knew there was a serious issue on ground, there was a need to pray, but sleep and tiredness suppressed that burden to pray. May God wake us up from every spiritual sleep keeping us from praying.

This is another thing that suppresses prayer burdens. James 5:17-18 tells us that Elijah’s prayers were effective and powerful because he prayed earnestly; he prayed with passion and fervency.

But today there’s a lot of un-seriousness when we pray, yet we want results. We are praying and at the same time answering calls, sending texts, looking at someone’s outfit, or thinking about what we will cook or eat when we get home. Such prayers don’t get anywhere. They don’t move heaven and they suppress the spirit of prayer.

Throughout the Bible, we see that when believers prayed fervently, prayed seriously, prayed with passion and enthusiasm, the Spirit of God moved in an awesome and very powerful way. It wasn’t until the day Hannah was so serious with her prayers to the extent that the priest mistook her for a drunken person that her prayer was answered (1 Samuel 1:12-13). The Apostles in Acts 4:23-31, prayed so earnestly that the place where they were praying was shaken with the power of God. Jesus before he was crucified, prayed so fervently that at a point His sweat was like drops of blood falling to the ground (Luke 22:44).

In Colossians 4:12, Paul speaking about one of his coworkers said the man was always wrestling in the place of prayer. When we pray, we are in a spiritual wrestling ring. Which boxer would be in a boxing ring and then when his phone rings for example, he picks up his phone to chat? He won’t dare do this because he knows that the moment he is not concentrating on his match, he will be landed with a serious blow. Praying without any form of fervency and true committment, makes it easy for the devil to release some serious blows on believers.

We have all been in this kind of situation. There isn’t anyone that can say every single prayer you ever prayed has been answered or was answered at the exact time you needed an answer. But that is not enough to silence your voice of prayer. When it comes to prayer, we should have the attitude of David. What did David do when he prayed about something and he didn’t get the answer he wanted? In 2 Samuel 12:15-22, after David committed adultery with Bathsheba and she had a son for him, the child fell seriously ill. David spent time praying and fasting for God to heal his child. In fact, when the child died, his servants were afraid to bring this news to him because they thought with the way he was fervently praying and fasting for this child’s life, he could do something drastic when he hears that the child is dead. But David didn’t respond in this way. David’s prayer wasn’t answered but he still saw a reason to keep on worshipping and serving God, to keep on praying. We didn’t hear that David stopped praying to God because of that incident. David must have encouraged himself in the Lord saying I will still bounce back up despite what was happened. David must have had an understanding that anything God doesn’t give him, isn’t worth having. David understood that God loves him too much to do anything that won’t be for his overall benefit. This was why he still maintained a close relationship with God after this incident. But so many believers have drifted from God today because of things they asked Him for which He hasn’t yet done or didn’t do.

But if we sincerely look at our lives and God’s dealings with us, we will observe that there have actually been times we prayed for something and got what we asked for. There have also been times when we prayed for something and God gave us more than what we asked for. And there have been times when we prayed for something and instead of God giving us what we asked for, He took us by surprise and did something we couldn’t ever have imagined could be ours. That’s why Ephesians 3:20 says God does immeasurably more than we ask or imagine. To keep the fire of prayer burning, always remember those times no matter how few that your prayers have been answered. We shouldn’t allow ourselves get so worked up and discouraged because there’s  something we have been praying for and nothing has been done about it. For all you know, God not giving you that thing is to save your life. The thing you are asking for may be a danger trap; it may be something that can destroy you. Don’t ever allow anything cut you off from prayer. Keep holding on, keep praying. Your prayers will surely avail much if you can persist and prevail no matter what you see, no matter what you hear.

4.      A self sufficient and self-reliant approach to life

This is the last thing I want to talk about that suppresses the Spirit of Prayer. Prayer is actually reaching out to God and seeking God’s help and strength. But for some people, they don’t see the need for this. They may even make fun of you when they see you praying about everything. They think they have what it takes to make it in life and through life. They wrongly believe that they have the qualifications, experience, abilities, connections, resources etc., that can help them through life. They have an inbuilt pride on the inside of them telling them that whenever there is a need or problem, they have what it takes to handle that need or situation.

One of the names of God is EL-SHADDAI. The name means the ALL SUFFICIENT ONE. Only God is sufficient and doesn’t need any one’s strength, knowledge, or wisdom. We have no sufficiency of our own. Anytime you refuse to pray about a particular situation, decision, or need in your life, what in essence you are doing is telling God that you don’t need Him, you can cope on your own, you can handle the situation on your own, I am sufficient, I am able, I am capable all by myself. But this isn’t true. We are all in need of God for it is IN HIM we live and move and have our being. It is IN HIM not in our strength, not in our capabilities, not in our wisdom that we exist.

God was not happy with the church in Laodicea in Revelation 3:17 because they had a self-sufficient and self-reliant approach to life. They felt they had accomplished so much in life that there was no need for God. Their trust and confidence was in themselves. This greatly displeased God.

Self-sufficiency and self-reliance can keep you from experiencing the power of prayer. In fact, with such an attitude, you will greatly undermine the place of prayer in your life because you believe you don’t need God.

To have an attitude of absolute trust, faith and confidence in God increases your prayer tempo. It gives you reasons to pray. It opens you to the amazing power of God that is made manifest when believers pray.

May God destroy any form of self-reliance and self-sufficiency in us, so that God’s grace and power increases mightily in us as we daily come to the place of prayer; the place of power.

2 thoughts on “THE SPIRIT OF PRAYER”

Leap Over the Obstacles of Life

Throw Yourself into What God Created You to Do

6 WAYS TO INFLUENCE PEOPLE FOR CHRIST

This second half of the year, God will keep you and your family in His arms of protection. No danger