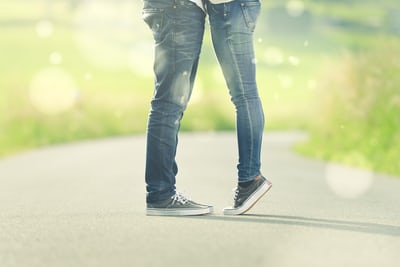 Love…love…love. What a powerful word. What an abused and misused word. Are you in a relationship with someone and you both often say ‘I love you?’ How easy it is to say ‘I love you’, but to truly love is another thing. Perhaps these stories of some single ladies and guys who thought they were in love, will give you a better understanding of what it really means to love.

No one ever thought Yewande and Edet would make it to this day. Their relationship had been plagued with one obstacle after the other which kept prolonging the big day they had been praying and hoping for.

First, it was the family obstacle. Initially, Yewande’s parents had their reservations about Edet. And well, you couldn’t really blame them. Her educational and social background was higher than his, he happened to come from a tribe they didn’t particularly like, and to worsen things, Edet was a full-time pastor. But with the passage of time, Yewande’s parents discovered Edet was actually a nice, honest young man who sincerely cared about their daughter.

Then there was the distance obstacle. Fortunately for Yewande but unfortunately for their relationship, her job offered her an opportunity to travel abroad for a two year course. She really wanted to go and make the most of this opportunity, but then what would happen to their relationship and wedding plans the two years she would be away? Would Edet be faithful and keep on loving her even though she was miles away? Would he start a relationship with someone else while she was away?

Those two years they spent apart were the most difficult ever. But the e-mails, cards, pictures, calls, and of course the Lord, helped to keep their love and commitment alive in their hearts. Their love stood the test of time. Their love was willing to wait.

LOVE DOES NOT BOAST…

Ever since Martha got engaged to Edward, she had turned herself into a first class nuisance. Wherever she went, she bored her friends and anyone who was willing to give her an ear about how wealthy Edward was, the wonderful and expensive gifts he had bought for her, the romantic and exotic places he had taken her to, and how much money her family and his were going to spend on their forthcoming wedding.

Then one day, when Martha called up Tracy, her close friend, to fill her in on the latest gift Edward had gotten for her, Tracy stopped her to ask, “Martha, what if Edward lost his job or car, or something terrible happened and he became blind or paralyzed, would you still love him?”

That down to earth question made Martha realize what she really loved was the idea of being married to one of the richest bachelors in town, the thrill of being the center of attraction, and the joy of having someone to brag and boast about to her friends who were older than her and still single.

The day Kunbi was to reveal a very important aspect of her past to Michael, her heart was pounding with fear. She was so scared and worried about what his reaction would be. Some years back, she had told this same thing to some other guy she was to marry and it ruined their relationship. So as she thought of the man she loved dearly and having to open up her past to him, she couldn’t help but wonder if the same thing would happen with Michael.

As Kunbi spilled out everything to Michael, she noticed the shock and confusion on his face. In all his dreams and plans for their marriage, Michael never imagined there would be a third party in their relationship. He never envisaged the lady he loved and wanted to marry, had a nine-year-old daughter he had never heard or known about.

As Kunbi told Michael all about her past, the things she had been involved in before she surrendered her life to the Lord and how she had gotten pregnant, she didn’t hear from him for days. The days turned to weeks and still no word from Michael. During this period, Kunbi was an emotional wreck.

Then after a month of silence, Michael came to see her. He said he had been doing a lot of thinking and praying and he wanted her to know that irrespective of what had happened to her in the past, he still loved her and wanted to marry her. Her joy knew no bounds.

Real love doesn’t walk away when confronted with the faults, failures or weaknesses of others. It is not a temporary feeling that is here today then disappears tomorrow. Betrayal, moral failure, or terminal disease cannot quench the fire of love.

I have this friend whom I happen to admire for one thing in particular. In practically everything she does, you can see her deep love and commitment to God. Rather than brood, gripe and get frustrated over the fact that she’s still single, she lives each day with the hope and assurance that no matter the circumstances she faces in life, God is still God, His word is still true, and He is daily working out all things for her good. This belief which she holds so tightly to, assures her that very soon her own wedding bells will ring.

LOVE IS NOT PROUD…

Rosemary was forever trying to impress Kola with how great she was and how lucky he was to have someone like her. Many times she criticized him and put down his suggestions, which she believed were not as good as hers. Rosemary was so full of herself the only thing that counted was her own opinion and feelings. If she wasn’t careful, her superiority complex which made her act like she was doing Kola a big favor by agreeing to marry him, would soon drive him away from her.

Although her accomplishments and achievements over the years were greater than Kola’s, Rosemary had to learn to humbly accept Kola for who he is and stop elevating herself and belittling the man she claimed to love.

True love is never puffed up. Rather, it seeks loving and encouraging ways to build up others.

I can imagine the look on Joseph’s face the day his friends popped in to tell him the latest gist circulating round the town. “Your fiancée Mary is pregnant. And from what we hear, you are not the father of the child”.

Joseph could easily have joined everyone else to point fingers at Mary and condemn and criticize her, but the love he felt for this young lady wouldn’t allow him to. He chose to love her even when it seemed foolish to do so. He chose to believe her word even though it sounded so incredible, strange and ridiculous that the baby growing in her was conceived by the Holy Spirit (Matthew 1:18-25).

LOVE KEEPS NO RECORD OF WRONGS…

After Jolomi broke up with Tosan, she had built an iron wall around herself and wore an invisible signboard which read, “OUT OF BOUNDS TO MEN”. The pain and disappointment she experienced when she discovered Tosan was involved with her best friend, not only broke her heart, but also her faith. Ever since then, marriage and men were the last two things she wanted to hear about or have anything to do with.

Jolomi had to learn that notwithstanding the gravity of the hurt people inflict on us, we must forgive the faults and failures of others to keep pressing on in life. By living this way, we prove to the world we are true followers of Christ who love not just in words, but with our actions and very life.