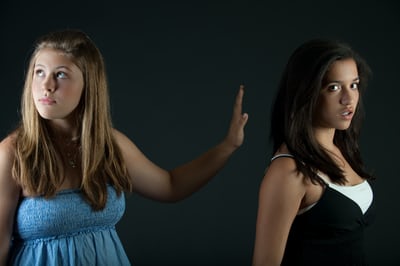 We can’t live our lives without people, but we can ensure that the people in our lives don’t keep us from getting to the place God has prepared for us.

Here are 5 things you shouldn’t allow anyone do to you:

1. Make you feel spending time with God is an utter waste of time. Whenever Hannah who was barren, went to the house of the Lord, her rival Peninnah, would mock her. This went on for years (1 Samuel 1:7). Peninnah did this to make Hannah feel she was just wasting her time thinking God could change her situation; God could make her a mother. But the day God remembered and visited Hannah, Peninnah couldn’t open her mouth again to say anything derogatory to Hannah. Don’t allow anyone make you feel spending time with God is a waste of time. You may not see any changes the first, second or even tenth time you pray, but God is hearing your prayers and at His appointed time your testimony will manifest.

2. Make you believe that you can’t be successful until you do things their way; until you adopt their own idea, style and approach to life and situations. When David was to face Goliath, Saul clothed David with his armor, bronze helmet and coat of mail. As far as Saul was concerned, this was the only way you could go to battle and succeed. David refused to go to battle dressed in Saul’s outfit, he said ‘I cannot walk with these, for I have not tested them’ and took them off (1 Samuel 17:38-39). David went to battle with what he was comfortable with and he came out very successful. Don’t allow anyone make you believe you have to do life their own way before you can be successful. God has a different path for everyone. Discover your own path, your own style and run with it.

3. Allow their faulty perception of you define you or hinder you from reaching your goal. The day Hannah was pouring out her heart to God, Eli saw her and wrongly assumed that she was drunk because of the way she was praying. Hannah didn’t allow Eli’s faulty perception of her keep her from praying to God. She didn’t allow his false accusations work her up and make her storm out of the house of God in anger. She remained focused on what she came to do – to pray to God for a child (1 Samuel 1:13-20). Her prayers that day reached out to God and brought her years of barrenness and reproach to an end. Everyone is entitled to their opinion, but don’t allow their opinions or faulty perceptions of you distract you from reaching your goal.

4. Pressure you into taking the ‘easy route’ and miss out on the great things that are in store for you on the road of hard work, commitment, sacrifice and dedication. In Ruth 1:8-17, after the death of Naomi’s husband and sons, she decided to return back to Judah. Her two daughters in law – Ruth and Orpah said they would come along with her. But when Naomi made it plain and clear that their chances of getting married again if they remained with her were very slim, Orpah changed her mind and left her. Oprah must have reasoned it out in her mind that if she left Naomi, she would break whatever ties, attachment and commitment she had to Naomi and have a better chance of getting married again. Orpah couldn’t see any guarantees in sight. Staying with Naomi would be difficult and she wasn’t ready for that kind of stress so she immediately takes off. Ruth on the other hand, in spite of the pressure Naomi puts on her to go back, refuses to turn away from Naomi. She stays with her through thick and thin, she stays with her when it isn’t comfortable and convenient to, she stays with her working hard in the field from morning to evening (Ruth 2:1-7). This is how Boaz notices Ruth, finds himself deeply attracted to her and marries her. Ruth’s pain and reproach of widowhood is removed and she gives birth to a son who lands her a place in the genealogy of Jesus Christ (Ruth 4:13-17). There are many easy routes and short cuts in life, but don’t allow anyone pressure you to take them as you can miss out on something great God has packaged for you.

5. Accept that your situation is too bad for God to step in and change or it is beyond God’s redemptive power. When Jesus was at the tomb of Lazarus, Martha told him ‘Lord, by this time there is a stench, for he has been dead four days’ (John 11:39). Martha was in essence saying the situation is now really bad. Maybe if you had come earlier something could have been done to salvage the situation, but now that he has been dead for four days, what good could possibly be done! Jesus tells her that even in this hopeless situation, you can see the glory of God if you believe and not give up. This is how a man who had been confirmed dead came back to life (John 11:40-44). Nothing is too difficult for God, no situation is beyond God’s redemptive and miracle working power. So, don’t allow anyone make you believe otherwise.