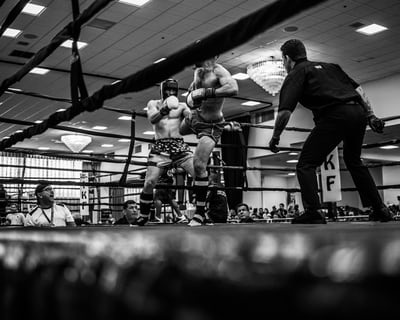 There’s a battle to be fought. Don’t let anyone convince you otherwise. Ephesians 6:12 tells us that ‘For we do not wrestle against flesh and blood, but against principalities, against powers, against the rulers of the darkness of this age, against spiritual hosts of wickedness in the heavenly realms’. We are wrestling, we are battling with unseen enemies, forces and powers. In this battle, we are to cause great havoc and destruction, but not on flesh and blood, like you and I, but in the spiritual realm, in the kingdom of darkness. There’s a good fight every believer must get actively involved in. I Timothy 6:12 tells us to ‘Fight the good fight of faith’. Fighting is good for the believer if it is the good fight of faith; if it is a fight against the kingdom of darkness, if it is a fight against everything that exalts itself against the knowledge of God, if it is a fight that pulls down strongholds of sin, satanic oppression, and hindrances (2 Corinthians 10:3-5). Exchanging words with your boss for not approving your promotion, or exchanging blows with your spouse for a text he received from his secretary is exerting your energy in the wrong place and activity. There’s a place to engage in a fight against everything standing in the way of your promotion and marital joy and that place is the place of prayer.

In Colossians 4:12, Paul spoke highly of Epaphras, a servant of Christ Jesus, who was involved in the good fight, who was always wrestling in prayer for the believers, that they  may stand firm in all the will of God, mature and fully assured. When this man prayed, he engaged in a fight, a spiritual battle against everything that could take the people he was praying for outside the will of God. He prayed, he wrestled, he fought to see that the believers were firmly established in the will of God. This is the fight that is worthy of commendation, not the fight of a believer slapping a bus conductor because the bus conductor was rude to him or a believer throwing water on your neighbour because she was playing loud music all through the night.

In Jeremiah 51:20, God says ‘You are my battle-ax and weapons of war: for with you I will break the nation in pieces; with you I will destroy kingdoms’. God uses us to destroy things He did not plant and plan for our lives, family, church, nation and the world at large. God fights battles through us in the place of prayer. Prayer is a strong battle-ax; prayer is a weapon in the hand of God that can break to pieces, scatter, pull down, throw down, uproot and destroy everything contrary to the will of God.

When we pray God opens our eyes to what the enemy is planning. In 2 Kings 6:8- 12, when the King of Syria was making war against Israel, Elisha had insight through prayer into the specific places the Syrians were camping in readiness to attack the Israelites. The Israelites escaped being attacked and put to death by the Syrians. God frustrated and made nonsense of all the well thought out plans and schemes of the Syrians by revelations received in the place of prayer. When we pray, God shows us what the enemy is up to and we are able to scatter satanic plans and evil agendas so they don’t see the light of day.

Every time we draw near to God in prayer, we enter into the presence of God. The more time we spend with God, the more our lives are immersed in and surrounded by God’s presence. The presence of God by your side will give you great victories. The forces and powers of darkness may have gathered against you and your family. They could have planned to wreck your marriage, children, health, business and ministry. They could have made all kinds of evil pronouncements about you that you will never amount to anything or that all your female children will not get married or that whenever a big business or opportunity is coming your way, a strange sickness will come upon you that will keep you from carrying out that project. Do not let your heart faint, do not be afraid, do not tremble or be terrified because of such enemies. As long as the presence of God is with you, God will fight for you against those that rise up against you (Deuteronomy 20:1-4). Every evil counsel taken against you will come to nothing because of the presence of God with you. Every evil word spoken about you will not stand because God’s presence is with you. God uses the glory and majesty of His presence to back us up and fight for us as we pray and call upon His holy name. God with you doesn’t mean freedom from struggles and battles, it means victory over the battles of life.

Don’t work yourself up and give yourself a headache because you are surrounded by enemies who are always planning evil for you. The thing you should be concerned about is: do I have the presence of God with me, am I spending time in God’s presence?  If you are committed to spending time with God in prayer, then be rest assured that God will give you strength each day to fight. No weapon fashioned against you will prosper as you fight the good fight of faith; as you stand on the Word of God, pray the will of God into being, and resist the operations of the devil (Isaiah 54:17, James 4:7).

The Faithfulness of God

“Through the Lord’s mercies we are not consumed, because His compassions fail not, they are new every morning; great is

Whatever we focus on has the power to influence how we think, speak and live. To produce better and wiser

The things that will fill my heart with joy, God will make happen this month. November shall be a month