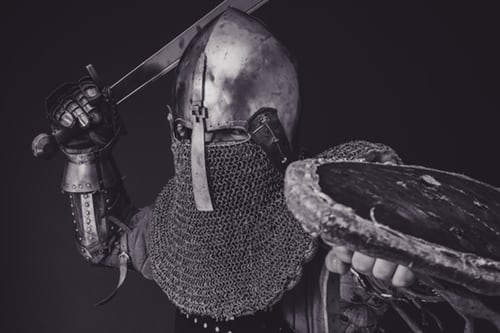 Today's Devotional Post
February 7, 2020April 26, 2022 Tesh 0 Comment God will fight for you, Stand Still and See God's Salvation, Tesh Njokanma, The Egyptians you see today, When God fights for you, you shall see no more

Exodus 14:13-14 New King James Version (NKJV)
13 And Moses said to the people, “Do not be afraid. Stand still, and see the salvation of the LORD, which He will accomplish for you today. For the Egyptians whom you see today, you shall see again no more forever. 14 The LORD will fight for you, and you shall hold your peace.”

God’s Word to you today is No more Egyptians in your life. Egyptians represent anyone and anything that fills our hearts with fear. The reason why Moses told the Israelites not to be afraid was because their hearts melted in fear at the mere sight of the Egyptians. Are there people that once you see them you are afraid and fainthearted? Are there situations that the mere thought of it fills you with dread and panic? As the Israelites saw the Egyptians at their back and the Red Sea in their front, they felt this was the end for them, the Egyptians would finish them, they were dead meat! But God fought for Israelites and those they thought would kill them, were destroyed by the power of God. God’s Word to you today is that any situation whether it is a terminal disease, an enormous debt, a marriage at the brink of divorce, a spiritual problem you have been battling with for years, a child on drugs, or a child that has been rusticated from school, whatever is the situation, it won’t kill you. God will fight for you and give you victory. God’s Word to you is no more Egyptians; you will overcome whatever it is that has the capacity to kill and destroy you.

The Israelites were troubled when they saw the Egyptians because seeing the Egyptians reminded them of the pain, oppression and heavy burdens they had carried and endured for so many years in Egypt. When they saw the Egyptians, another thought that ran through their minds was that if these people don’t kill us here and now, they will take us back as slaves. This meant retrogression for them; going back to their years of bondage. But God fought for them and they moved forward through the Red Sea. They didn’t go back, they didn’t experience any form of retrogression. God’s Word to you today is no more Egyptians; every person, force or power of darkness that says you won’t move forward in life, you will take one step forward and many more steps backward will be destroyed and put to shame as God fights for you.

No more Egyptians is God’s way of saying I will do what is humanly impossible for you. Standing before the Red Sea, two things looked most probable: the Egyptians killing them or the Egyptians taking them back to Egypt. The thing that looked far-fetched, like something you read about only in fairy tales, was for the Red Sea to part into two for the Israelites to walk through it. But God fought for the Israelites and the thing that looked most unlikely, what appeared inconceivable with the human mind, happened right before their eyes. God made the unimaginable possible for them. God’s Word to you today is no more Egyptians; every impossibility before you will become a reality.

Simply put, Egyptians represent the problems in people’s lives. When God says no more Egyptians, He is telling you stand still while I will deal with that problem. He is assuring you that you will see the salvation of the Lord, He will accomplish a great deliverance in your life; He will completely remove that problem from your life as He arises in His power and might to fight for you. May the Word of God accomplish the purpose for which He sent it. May we see the end of all those problems that make us fret, worry and recoil in fear, may we experience the amazing power in the outstretched hand of God to completely wipe out problems from people’s lives.

PRAYER
O Lord, My Father, fight for me today and put an end to all the ‘Egyptians’ in my life.