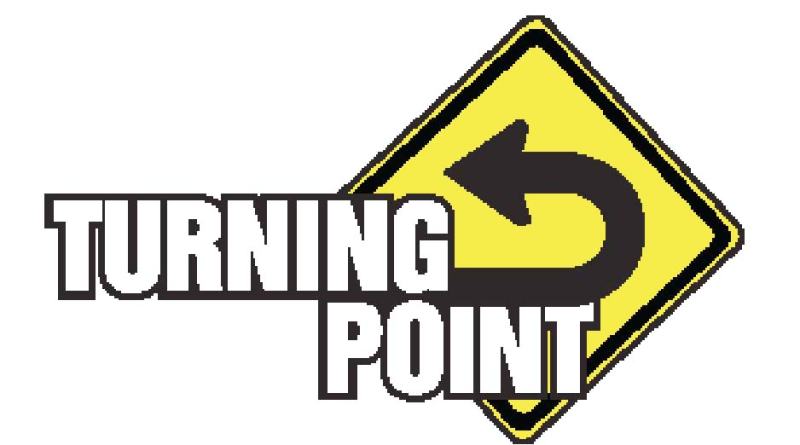 Text:  “You turned my wailing into dancing, you removed my sackcloth and clothed me with joy.” (Psalm 30:11).

Today I will be talking on TURNING POINT for I strongly believe that somebody is about to experience a turning point.

What is a Turning Point?

A turning point can be defined as the point at which a significant change occurs, usually a change for the better. This change for the better can occur in an individual’s life, it can take place in a family, an organization, or a nation. In the Word of God, we see accounts of individuals, families and nations that experienced a turning point; a point where things turned around and changed for the better. For example, the day God called Abraham to leave his family, people and country, was a turning point for Abraham (Genesis 12:1). In Exodus 3, when God called Moses out of the burning bush to go to Egypt, this was a turning point for the Israelites who for over 400 years had been subjected to slavery and cruel bondage. The year King Uzziah died, was a turning point in the life and ministry of Prophet Isaiah. That year, Isaiah saw God like he had never done before (Isaiah 6:1-8). I believe that today, someone will experience a turning point and you will begin to see God like you have never done before.

There are four things that happen when a person experiences a turning point from God:

Mourning in this sense is not restricted to people who are mourning because they have just lost a loved one. Even when no one close to you has died, you can be mourning; you can be sad, in deep pain and heavily weighed down. A classic example of someone that was in this kind of situation is Hannah. 1 Samuel 1:6-8 tells us that Hannah had been waiting for a child for many years. She got to a point where she was always crying about this situation (even though she hadn’t lost anyone). The situation affected her appetite. It affected her physical appearance. Publicly and secretly, people were mocking her. Just like Hannah, there are people who have been mourning; who have been facing situations that make them cry, weigh them down, have taken away their appetite and given them many sleepless nights. Publicly and secretly, they are being laughed at. If you are such a person, today is a turning point for you. God will turn your mourning into dancing.

How did God turn Hannah’s mourning to dancing?

2. God repairs situations or people that can be classified as a write-off

There are some car accidents that are so bad that after the accident, the car is a write-off. The damage to the car is so bad that after the accident, the car is abandoned by the owner. The man in Mark 5:1-5 is an example of someone you can describe as a write-off. This man was not the regular kind of mad man we see walking on the streets or under the bridge. This man was raving mad. His case was so pathetic that he lived in the cemetery. You can imagine someone living comfortably with dead bodies. The interesting thing about this man’s story which is where I am going, was that no one could solve his problem, no one could control him, no one could handle him.  Sometimes, you could be in a financial problem and you talk to one or two relatives, friends, or church members, and they help you out, they give you the money. But there are some financial, spiritual, health, or marital situations that you face that are beyond man. For people like that man in Mark 5:1-5 who are in a situation that you or people have written off, situations that no doctor has been able to solve, no pastor has been able to handle, God has come to visit such people today. God loves situations like this because when He steps in like He will today, no man, woman, pastor, friend or relative will be able to take the glory. God is going to do something in somebody’s life that all the praise, glory, honour, worship and adoration will go to God and God alone (Isaiah 42:8).

3. God turns every evil plan against the person around

Just like God turned the evil plans against the Jews around in Esther 7:3-4, He will do the same for you. Sometimes like it happened to the Jews, the devil and his agents have dug a pit for you, or are at work doing something to frustrate you and bring you down. But thank God that the same God that made all the evil plans of Haman against the Jews to backfire is still alive and He will turn every evil plan against you around.

There are people whose situation is like Joseph. In your own case, Satan has already done his worst. He has thrown you into the pit. It could be a financial, spiritual, marital, or health pit. Or he has placed you in a spiritual, financial, marital, or health prison. But look at what Joseph said in Genesis 50:19-20 after Satan had done his worst. He said you intended to harm me, but God intended it for good. Everything Satan has done thus far to harm you, God is going to turn it around for your good. The reason why God will do this is because if He doesn’t, His name will be at stake. There are two things that God places a very high value on – His WORD and His NAME. God doesn’t joke with any of His names. He can never allow His name to go to the mud, be spoken lightly of, or ridiculed. God will not cross His legs and allow people to say concerning a genuine child of God that the person put His trust in God and God couldn’t save him or her (Isaiah 36:18-20). Satan may have succeeded in putting you in a pit or prison, but today God will deliver you for the glory of His name.

4. God turns the person from the error of his ways

Proverbs 14:12 says that ‘there is a way that seems right to a man but at the end is destruction’. There are things we do, choices we make that on the surface look like they are okay and good for us. But at the end of the day, they bring nothing but pain and regrets.

In the parable of the prodigal son in Luke 15:11-18, this man thought he was doing the right thing, had made a wise choice when he asked his father for his own share of his inheritance. On the surface, things actually looked like they were going on well for this man. He had come into good money. He travelled out. He was enjoying himself going to parties and living in a big house. But what later happened to him? Abject poverty of the worst kind, to the extent that he was depending on the food of pigs for sustenance. But this was someone who appeared to have started off well with a lot of money in his account. All this happened to him because he wasn’t with his father, he wasn’t close to his father; he had cut off completely from his father. The prodigal son realized that when you are not with your father or where your father wants you to be, things may appear to be moving on well for you financially, at work, or at school, but all that is just a facade.

I pray that God will help us all to make a U-Turn and return back to God like the prodigal son returned to his father, so we don’t fall into error and miss it, or cut ourselves off from our glorious inheritance in Christ Jesus. We shall not miss it in Jesus name. May you experience this turn around today in Jesus mighty name, amen.