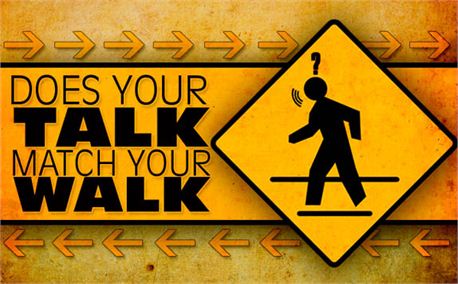 What we say probably affects a person more than any other action we take. Words are potent tools in the hands of the speaker which can be used for either building up or tearing down, healing wounds or creating scars, killing dreams or fulfilling destines. Your words could make a whole lot of difference to each person you meet. What kind of words are you known for?

Whenever Anita walked into a room, she could within a few minutes kill all the warmth and laughter in the air with her sarcastic and nasty remarks. She always had something unpleasant to say about everything and everyone. No matter how hard you tried, she would find the perfect words to run down your efforts and make you look like a complete fool. It was no wonder that her husband who had had it up to his neck with her nagging and harsh criticisms, recently moved out of their house to give himself a breather.

Proverbs 12:18 tells us that “Reckless words pierce like a sword, but the tongue of the wise brings healing”. We need to daily apply the same degree of care to the words we speak as we do to our driving, or we may end up causing some emotional accidents with our tongues.

“The words of a talebearer are as wounds and they go down into the innermost parts of the belly” (Proverbs 26:22).

It’s really amazing the way some people seem to always know everything that’s happening in other people’s lives. Not only are they experts in getting the latest gist in town, they are highly skilled in adding spice to the stories they spread around. There are two main reasons why you need to beware of such people. Firstly, everything they say has to be taken with a pinch of salt as you never know which part of the conversation they are having with you has had some pepper and special flavourings added to it. Secondly, your secret would become the talk of the day if you make a mistake of confiding in them.

The danger in being around such people is that if you are not careful and discerning, they can easily create wrong impressions in your mind about other people. Unconsciously, you find yourself believing and then responding to someone based on what you have been told by the talebearer that the person did or said. But for all you know, the poor fellow may never have said or done that thing.

“Don’t you think you are better off selling just fabrics?” It was just a suggestion from a friend after she made an outfit for her, but it put an end to Tracy’s life-long dream of becoming a fashion designer. The more she reflected on those words, the more incompetent she saw herself. And now because of that snide remark, her tailoring shop has been shut down while she’s busy pursuing an administrative job she neither enjoys nor gets fulfillment from.

God has uniquely created each of us with special skills, potentials and talents. We all have different ways of handling problems and projects. In expressing our personal views about someone else’s personality, work, or idea, we need to ensure that our words are helpful and constructive not discouraging and destructive.

You are ten minutes late for an important job interview in one of the leading oil companies in the country. It’s bad enough that you are stuck in the middle of a traffic jam, then from nowhere, some reckless bus driver comes along to cause confusion on the road and delay you even further. The next thing you hear coming out of your mouth to the bus driver is ‘Are you crazy? What kind of idiot are you? You must be a really big fool’.

When we exchange such strong language, it’s easy to give excuses such as I was provoked, angry, or irritated. Or the driver was obviously in the wrong. But do such excuses count before God? As far as God is concerned, our tongues are meant for praises and every other thing that is noble, pure, lovely and admirable (Philippians 4:8). The tongue is not for cursing, swearing or for any kind of obscenity. “With the tongue we praise our Lord and Father and with it we curse men, who have been made in God’s likeness. Out of the same mouth come praising and cursing. My brothers, this should not be” (James 3:9-10).

I can’t begin to count the number of times I have said something to a friend or relative, only for me to regret it the very minute the words were out. Most times we are too quick to speak; too quick to blurt out what is on our mind. But a truly wise person considers the consequences of one’s words before speaking. A wise speaker is sensitive to the moods, temperaments and feelings of those he or she is conversing with. A sensitive speaker knows the right words to say at the right time. A sensitive speaker knows when to give a soft answer, when to rebuke sternly, when to bring up a matter, and when to just let sleeping dogs lie.

Everything that meant something to this woman had been taken away from her. Her husband, her sons, her hopes and dreams for the future were all gone. Her first daughter-in-law had just left and the second would probably leave any minute from now leaving her as a poor, lonely, empty woman with no one in the world to turn to. But to her utmost surprise, Ruth, her daughter-in-law, drew near to her, held her hands tightly and said, “Don’t urge me to leave you or to turn back from you. Where you go I will go, and where you stay I will stay. Your people will be my people and your God my God…”(Ruth 1:16-17).

Ruth was actually trying to tell Naomi, her mother-in-law, not to give up, not to lose hope. That the fact that she had lost her husband and sons didn’t mean life was over. It didn’t mean she was a failure and had nothing good to offer anyone. Ruth was saying, I love you for who you are, not for what I can get from you. You are special to me and I can’t walk away from you.

Those words made all the difference to Naomi. They were warmer and more comforting than any hug could be. They made her feel special. They made her feel like a person of worth. They helped her to stop focusing on her situation and to focus on God. They brought hope back to her. They gave her the strength to wipe away her tears and start living again.

People all over are struggling with different kinds of fears and pains. The words we speak matter a great deal. They could make a person either give up in despair, or move on to become a person of relevance and value. And so we need to daily yield our tongue to the Lord, so the words we speak build up not tear down and make us real sources of joy and blessing.

6 thoughts on “Mind Your Language”