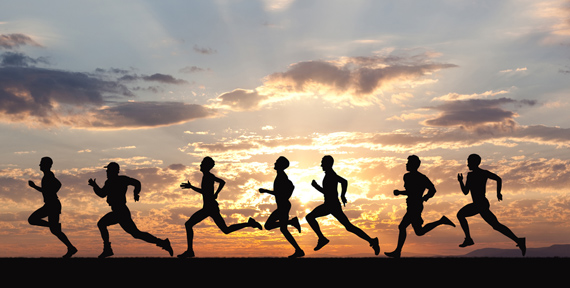 When God wants you to understand an important biblical truth, He usually uses an illustration from nature or everyday life that everyone can relate with. For instance, when talking about the Christian life, the Bible speaks of it in terms of a race one has to run and win. 1 Corinthians 9:24 says “Do you not know that in a race all the runners run, but only one gets the prize? Run in such a way as to get the prize”. Whether or not you watch, participate in, or support the Olympic Games, we all have a fair understanding of what running entails. We know without having attended any sports academy that you can’t win a 100 meters race by walking or jogging to the finish line. You need to run with a higher degree of speed to win a race of that nature. The Bible doesn’t tell us to walk or jog the Christian race. It says RUN! We must run the Christian race if we want to win. It’s much easier to walk while carrying bags in your hands than it is to run holding some bags in your hands. Because the Christian race is a battle to free yourself from all evil loads and baggage, we are advised to run the race not walk the race. God doesn’t want us in a position where we can accommodate one or two luggage as we move along; God doesn’t want us carrying any evil yokes and burdens in this race that’s why He says RUN! Walking is also safer than running. There are fewer chances of you getting injured when you walk than when you run. If there are no faith risks we have to take, if there’s no one trying to harm and injure us along the way, God would have said walk. God says run not walk because the Christian life is not a bed of roses. You will encounter some thorns; some difficulties along the way. But you have to keep running; you must endure, persevere and not give up until you get to the finish line. As you keep running, keep persevering, God will take care of the dangers along way, God will shield you from whoever and whatever is trying to harm you.

Hebrews 12:2 tells us that “…Since we are surrounded by such a great cloud of witnesses, let us throw off everything that hinders and the sin that so easily entangles, and let us run with perseverance the race marked out for us”. There is a race God has marked out for each of us. You have to discover your own race and run your own race not another person’s race. In everyday athletics, athletes competing in a game must start and finish within the lane assigned to them. Running outside your lane can form a good ground for disqualification. In the Christian race, anyone who wants to run and win must be able to run within the lane God has assigned to him or her. This simply means you have to follow God’s plan for your life and be the person God has destined you to be. You shouldn’t cross or switch lanes; you shouldn’t focus on another person’s race and start copying or aiming to be like that person.

There will actually be points and situations in our lives when we need to think and act like we are running a marathon or long distance race. There will also be times in our lives when we can’t afford to be relaxed and easy-going about things, we need to act and think like we are in a sprint or short distance race. The way God works is that because He has a different timing and purpose for each person, while one person may be going through a situation that appears to be like a marathon, another person may be going through a situation that feels like a sprint. The danger of comparison is that if you look at the person running a sprint, you may switch over to that person’s race and lane because you think things are happening faster for that person. But because at that stage in your life what God has marked out for you and equipped you to run is a marathon, if you go and run the sprint race, you would just get tired, experience burn out, and probably get frustrated with life because you are exerting more energy than God wants you to with little or no results following.

Take marriage for instance. One person’s time may be to get married at the age of 24. For another person, her timing may be to get married at 38. And this may have nothing at all to do with demons and ancestral powers. It may just be a case of maturity. The fact that two people are the same age doesn’t mean that they are on the same level of maturity. I’m sure you have come across people who are 24 and act and think like they are 38. Meanwhile, there are people who are 38 that act and think like they are 24. So for the person who gets married at 24, her marriage race was like a quick sprint. While for the person who got married at 38, she more or less had to run a middle distance race. The reason could be that God in His sovereignty had seen that if the 38 year old lady got married at the age of 24, her marriage would have collapsed after two years because at that age she wasn’t mature; she still had a fairy tale mindset and approach to marriage which God had to take some time to work on and change for her marriage to last. We must never run ahead of God, we must never cross lanes to another person’s lane as we go through the race of life. That’s the secret to running and winning the Christian race.

Run according to God’s plan and purpose for your life, run with the ability, grace and gifts God has given you not what He has given another person, run with your eyes on God’s clock not your own time, run with an unwavering determination to finish your race.